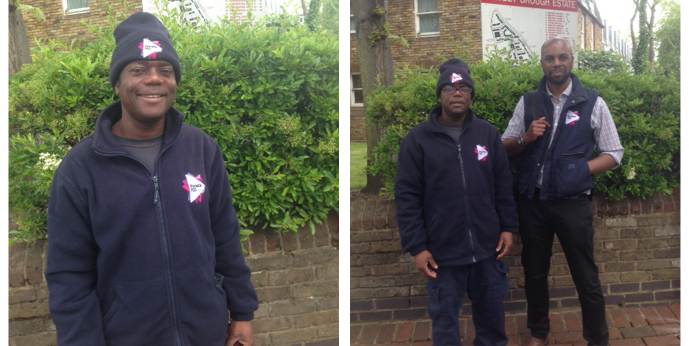 Solomon Saydee first came to Pinnacle People in 2014, having been unemployed for four years. This period out of work had become detrimental to his independence and his ability to support his family.

In 2014 he was initially referred to the PULSE project in Lambeth. During his time there he undertook garden clearance duties, enabling him to gain valuable first-hand experience.

After this successful initial period at PULSE, Solomon was put forward to participate in the Work Placement scheme with Pinnacle PSG, supported by Pinnacle People and PULSE. This provided Solomon the opportunity to work full-time for an extended period and learn new skills.

At Pinnacle PSG, Solomon worked with the Grounds Maintenance team for three months before being offered a full-time position in Estate Cleaning at the Mawbey Brough Estate.

Stuart Devine, Pinnacle PSG’s Contract Manager overseeing the estate had high praise for Solomon’s ambition and work ethic: “Solomon wanted a chance and once given one, he grabbed it with both hands and never looked back – Solomon was keen to learn new skills and even in the early stages he clearly had the ambition to better himself.”

By all accounts, Solomon has made the most of every opportunity provided, and has consistently shown his dedication. Muhem Miah, Estate Services Officer at Lambeth Housing Services commented on his genuine dedication: “I regularly see him focused on completing his duties to the best standards and I complement him on this. It is really good to have a reliable cleaner like Solomon on the estate.” Residents too, have given positive feedback and have complimented Solomon on the quality with which he carries out his duties.

Solomon’s plans for the future are to work his way up. He has been put forward to undertake BICS, an accredited and widely recognised cleaning qualification.

We congratulate Solomon on the terrific progress he has made and wish him every success in future.

It’s given me independence and allowed me to support my family.Solomon Saydee